Another benefit of trees: Cooler temperatures

Cities across Texas have endured record temperatures this summer, and it’s not solely the weather that’s to blame.

Developed areas often experience higher temperatures than nearby rural areas when green spaces are replaced with roads, parking lots and large buildings that retain more heat during the day than natural landscapes.

Areas in these microclimates of a highly developed city, known as urban heat islands, can be up to 20 degrees warmer than surrounding areas that are more rural, according to Climate Central, a nonprofit news organization that analyzes and reports on climate science.

In addition to air and surface temperatures, contributing factors for urban heat islands include heat generated from vehicles and machinery, buildings, road surfaces and even human bodies.
Even at night, urban heat islands retain the day’s heat.
“Because these surfaces are holding onto that heat during the day, cities are unable to cool off at night, even in the winter,” Martin said. “This prolonged exposure to warmer temperatures, even if it’s not necessarily warm outside, is forcing us to experience what was once considered long-term effects of the urban heat island at a quicker pace.”

Martin said urban heat is the nexus of potential issues within an urban environment, with higher temperatures affecting water quality and human health and comfort.

“It truly is like a trickle-down effect, starting with electricity consumption,” said Martin, noting that as communities rely more on air-conditioners to maintain a comfortable temperature, energy grid operators may be forced to resort to brownouts or blackouts to prevent system overloads.

That increase in energy consumption has a direct relationship to increasing air pollution and greenhouse gas emissions.

“The pollutants are harmful to human health but they also contribute to really complex air quality problems including things like ground-level ozone, fine particulate matter and even acid rain,” Martin said.

Those issues contribute to an increase in asthma and other respiratory problems.

Older adults, young children, people who work outside and people with health conditions are most likely to suffer health problems related to heat islands, and the impacts are unequally distributed across income levels.

“I don’t think it’s any great secret that low-income housing can be in some of the most environmentally inhospitable places within an urban area, with little to no greenspace and increased exposure to air pollution, flooding and other risks,” Martin said. “Those risks are exacerbated by the urban heat island and are putting these communities at an even higher risk.”

“High temperatures of pavement and the rooftop surfaces can heat up stormwater runoff, which drains directly from our streets into our storm sewers and is deposited unfiltered into the rivers and streams and even drinking water reservoirs as well,” Martin said.

The warmer runoff impacts the biodiversity of streams by limiting the oxygen available, meaning less capacity for life within our streams.

“Several studies have found that urban streams are hotter on average than streams in rural areas and that temperatures in urban streams can rise over 7 degrees during just small, regular storm events due to the heated runoff from urban materials,” Martin said. 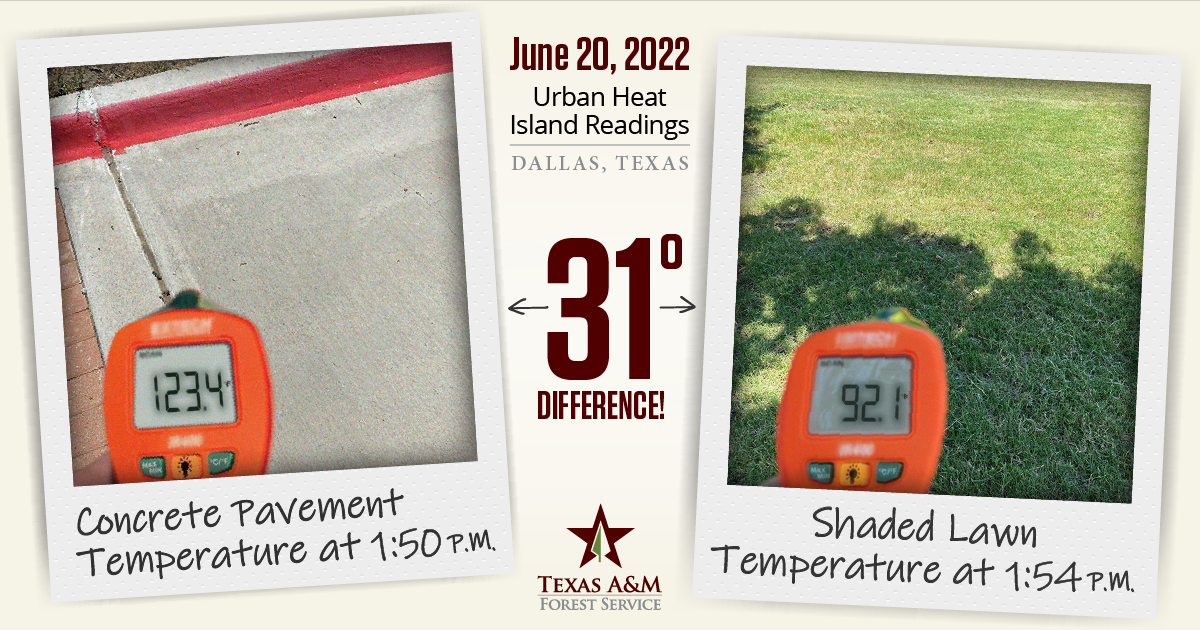 The benefits of trees

The good news is that the solution to some of the effects of urban heat islands may be as close as the nearest tree.

“Truly, one of the best defenses for our existing infrastructure is utilizing our urban forests, trees and vegetation to help cool the environment,” Martin said.
Larger expanses of trees can improve air circulation, creating a communitywide cooling effect while also acting as sinks for harmful pollutants.

“Trees are effective air filters by design,” Martin said, “filtering out not only gases that are harmful to us but that are harmful to the Earth’s ecosystem as a whole.”
Mature trees can release hundreds of gallons of water as vapor every day through their leaves, cooling the air. Shaded areas can be between 20 to 45 degrees cooler than peak temperatures in unshaded areas.

Connor Murnane, Texas A&M Forest Service District Forester who manages the W.G. Jones State Forest, said many visitors to the forest see it as an oasis in the urban setting.

The 1,700-acre property draws about 80,000 visitors to its shaded trails each year. It lies within Montgomery County and is surrounded by the growing cities of Conroe and The Woodlands.

A lot of the development has come in the past 10 to 15 years, Murnane said, creating what he called a “concrete jungle” of neighborhoods, apartment complexes, businesses and retail centers surrounding the forest.

Murnane said the forest helps absorb some of the effects of that growth, including water runoff.

“As these non-permeable surfaces like concrete, asphalt, things like that get built up around the forest, all that water that was once being filtered through the ground … now has to go somewhere else. Typically, the Jones (State Forest) catches most of that,” Murnane said.

Murnane said most of the visitors to the forest come for an escape from the hectic pace of their lives and to reconnect with nature.

“It’s one of the few places like it left within Texas, if not the nation,” Murnane said. “Some of the oldest trees are over 100 years old, contributing to an extensive canopy.”

That canopy creates cool zones in the forest.

“In the shaded areas of the forest, you’re looking at temperature differences of at least 20 degrees cooler underneath the shade than you would be out standing on pavement or in a parking lot somewhere,” Murnane said. 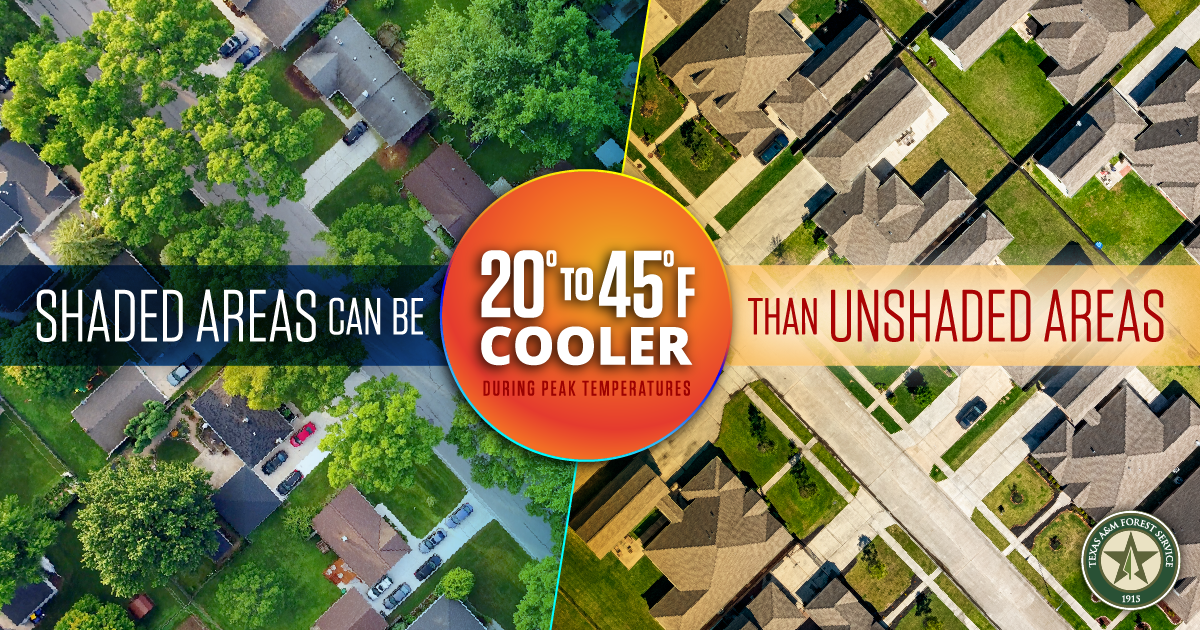 Murnane said the cities of Conroe and nearby Shenandoah have taken an active role in offsetting the effects of urbanization by committing to planting and maintaining trees. Both cities are certified through the Arbor Day Foundation’s Tree City USA program. Nearly 100 cities across the state participate in the program.

“Embracing that idea of maintaining and preserving and improving their urban tree canopy is critical to offsetting the urban heat island effects. Especially as cities develop and are ever-growing, the most important bit of that being maintaining what they do have,” which includes how they adapt to things such as invasive species, Murnane said.

“I would say that those cities that are making strides to commit to maintaining their urban tree canopy are really doing a good part to help offset the urban heat island effect,” Murnane said.

Jaime González, Houston Healthy Cities Program Director for The Nature Conservancy, said the organization has found success in forming partnerships to use nature-based solutions to work for healthier communities and aid in urban resiliency.

One partnership with a coalition of government agencies and research institutions, including the National Oceanic and Atmospheric Administration, used a group of community scientists equipped with heat sensors attached to their vehicles to collect data for a detailed heat map of parts of Houston and Harris County.

“In particular, we really wanted to showcase disinvested communities and communities of color,” González said. “And now that information is openly available and free for the public to use.”

That heat-mapping project in 2020 identified Gulfton in southwest Houston as the city’s hottest neighborhood.

“It’s a large immigrant community that is perhaps the most diverse community in the state. It is very dense by Texas standards, and it’s a community that has many strengths and leadership and beautiful people, but it has relatively little nature compared to other neighborhoods, particularly tree canopy,” González said.

On the August afternoon the heat-mapping survey was done, Gulfton was 17 degrees hotter than the coolest place measured in the county.

A pilot project to introduce nature-based solutions to the neighborhood will begin in the fall, with tree plantings and a forestry strategy.

The Houston Healthy Cities program is also working with a coalition of groups to try to bring shade to Houston bus stops, and is working with an architecture firm to create a model for a next-generation schoolyard at a preschool in the Alief neighborhood, another disinvested community.

The design includes more than 4 acres of prairie wetlands and over 200 trees.

“The whole campus is designed to absorb more water, to reduce mowing cycles and to be cooler,” González said. “We need to manage whole landscapes differently, including school campuses.”

González emphasized the importance of maintaining the existing tree canopy, along with the thoughtful placement of trees and diversity of species for the best results.

“There are some places where kids gather to play with no shade,” González said. “It makes the whole playground a lot less accessible during the summertime to kids who may not have an opportunity to travel elsewhere. So strategic placement of shade, including trees, is really important in places like bus stops, playgrounds and places where people gather.”

The nonprofit Texas Trees Foundation has also established partnerships with various groups and agencies to help further its mission of planting trees and protecting the urban forest across North Texas.

The 40-year-old group’s programs include initiatives to connect students and teachers to nature while planting trees at Dallas school campuses, transform the Southwestern Medical District’s streetscape into a tree-lined parkway, and provide opportunities for community members, homeowners associations and other organizations to design tree-planting projects for their neighborhoods.

Those programs originated from a 2017 urban heat island management study for the city of Dallas that found the city was getting warmer than every city in the country except Phoenix.

“It is about putting the right tree in the right place, especially in urban areas,” McGregor said. “You want that tree to make it over time.”

The 2017 study also led to the formation of an urban forest master plan, which was unanimously adopted in 2021 by the Dallas City Council.

“We want to change things up and create a different model,” McClelen said.

Part of that model relies on data delivered by street-level thermal sensors, which will be used to create models for design solutions that will favor pedestrians.

“They’re going to tell us what’s happening at the pedestrian level,” McClelen said. “We want to be able to influence the microclimate for pedestrians. Where we place benches, where we place food tables will be done based on science and not aesthetics.”

The group’s school campus project, a partnership with Dallas ISD, is about more than trees, McGregor said, and includes walking trails and outdoor classrooms.
“We’re trying to mitigate urban heat while connecting a human health aspect to it,” McGregor said.

McGregor and McClelen said the key to such projects is working in partnerships.

McClelen recommended starting with an inventory of existing trees.

“Many, many schoolyards do not have a single tree, and that would be a great place to start,” she said.